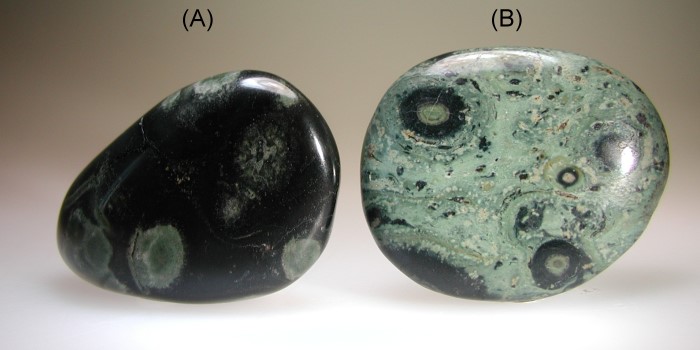 »Nebula Stone« (A) and »Kambaba Stone« (B) are varieties of a volcanic rock called »Eldarite« in the trade.

under the trade name »Eldarite« two typs of rocks are offered. The first variant comes from Mexico and consists of a (nearly) black rock with green dots and circles (A). Some people probably felt reminded of galaxies and star nebulae when looking at this rock, which is why they named it »Nebula Stone«. The second variant (B) comes from Madagascar and has usually substantially more green components.  In America it is known under the name »Kambaba Jasper«, in Germany it is rather traded under the name »Kabamba Stone«. For decades »Nebula Stone«, »Kabamba Stone« and »Eldarite« were used as synonyms.

In 2005 the supplier of the Mexican »Nebula Stone« announced in several e-mail circulars to German and international suppliers: "Nebula Stone is not Kambaba!" It was explained that »Nebula Stone« is a volcanic rock, whereas Kambaba (Kabamba) allegedly is a sedimentary rock, more precisely a fossil stromatolite alga, synonymous with "stromatolite jasper".

Since at the same time it was unmistakably pointed out that the term »Nebula Stone« was legally protected and could only be used for the Mexican material, the EPI laboratory was commissioned to examine the "Kambaba" rock more closely. 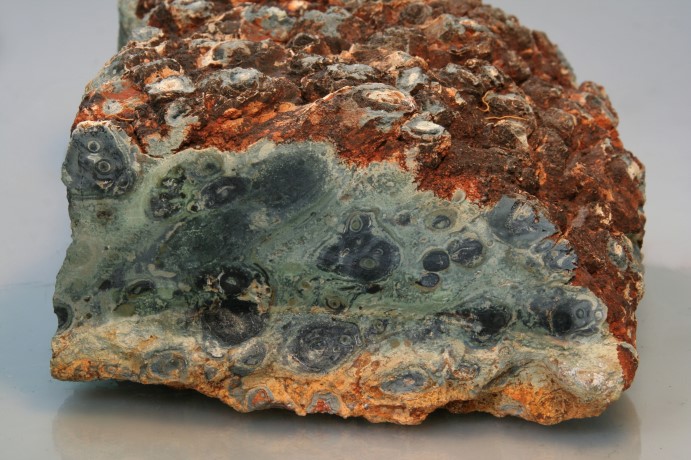 Fig. 2: The rough »Kabamba Stone« shows a crusty surface, similar to that of bulbous lava strands.

On the basis of a "hand piece" of several kilogram (Fig. 2) originating from the original site in Madagascar, thin section and microprobe analyses could be performed. The analysis showed very clearly that this rock is not a sedimentary rock. It consists of quartz and alkali feldspars (albite and sanidine or a related phase). Embedded in these are radially arranged green amphibole aggregates (pargasite, riebeckite or a related phases) mantled by fine-grained pyroxene (aegirine). Calcite occurs in traces only. This clearly refutes the claim that Kambaba is a sedimentary rock formed from stromatolite algae.

In the thin sections, mineralogically complex, roundish clusters of several phases or their pseudomorphs can be recognized under crossed polarizers. However, the fineness of the crystallites does not permit axial images. The amphibole is interspersed in minute needles and shows a flow structure in places, indicating crystallization from viscous magma. The quartz and some of the feldspar is recrystallized. The lack of undulose extinction of the quartz makes metamorphic overprinting seem rather unlikely. Relictic glass is not (anymore) present. 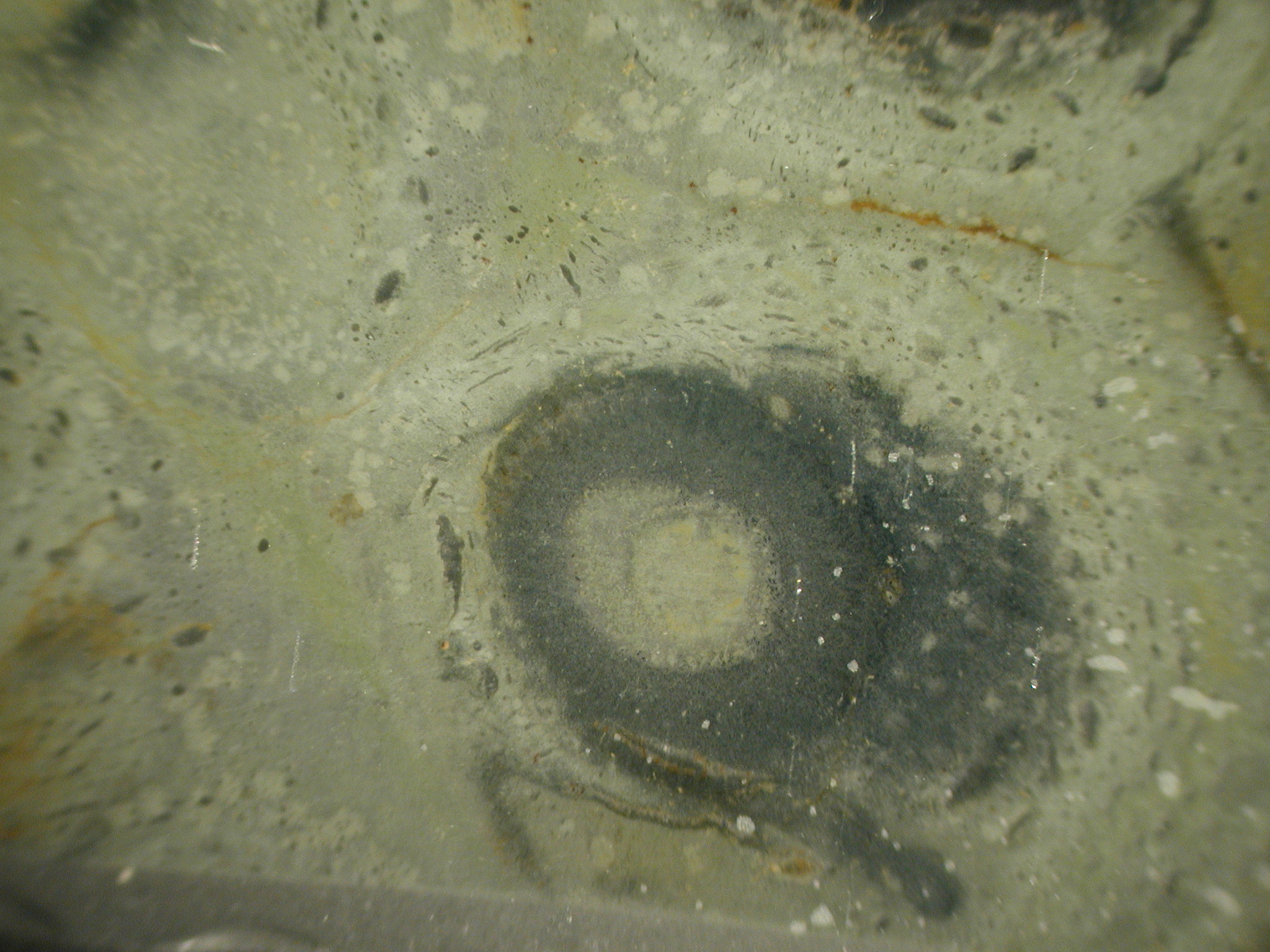 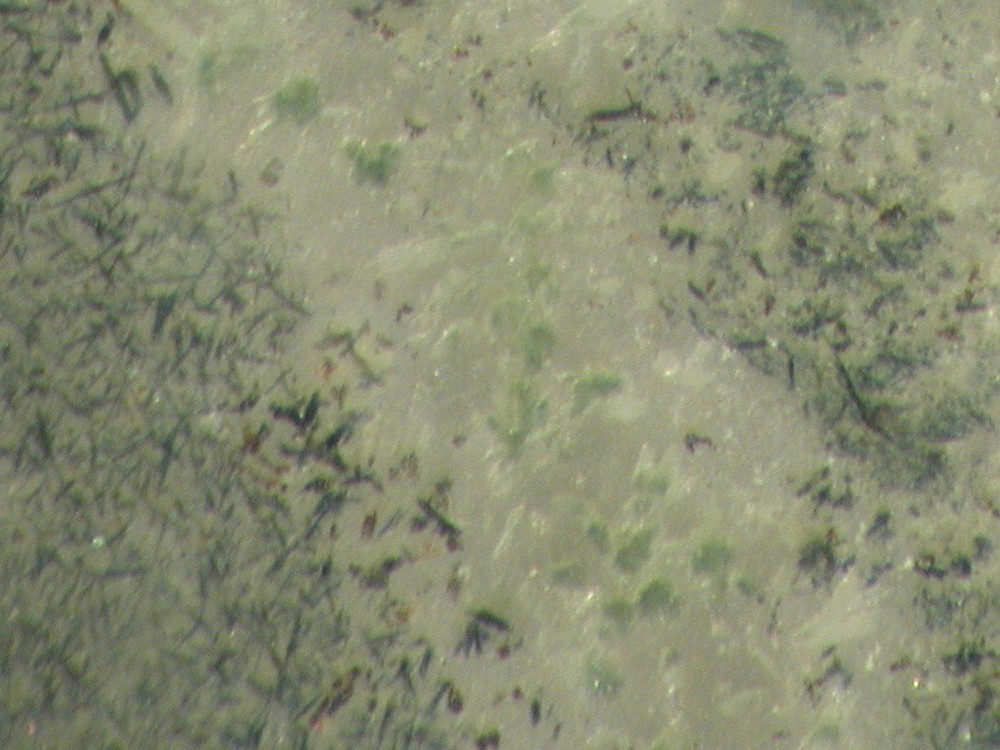 Based on these analysis results the rock was identified as vulcanite rock, more precisely as Rhyolite.

It can be assumed that the closely intergrown of the small crystals developed by the devitrification of a former melt. Investigations solely on the basis of a hand specimen do not allow any precise statements in this respect.

Based on the mineralogical analyses of the mexican »Nebula Stone«, which are published on the homepage of the American supplier, it is evident that this is a volcanic rock. In a 1995 analysis by Sidney A. Williams of the Globo de Plomo laboratory, USA, the rock is described as a fresh, alkali-rich volcanic rock composed mainly of four minerals: quartz, alkali feldspar (anorthoclase), amphibole (riebekite) and aegirine, with the riebekite partially replaced and sheathed by aegirine. The rock was determined to be Quartz-Pantellerite, which is nothing else than an alkali-rich Rhyolite.

Thus the mineralogical composition is quite comparable with the »Kabamba Stone«. Both rocks are volcanic rocks and both consist of quartz, one or more alkali feldspars, amphiboles (riebekite or related phases) and aegirine.

»Kambaba Stone« und »Nebula Stone« differ only slightly in mineral content. Only the amount of the individual minerals, their distribution and also the possible type of source rock differ remarkably. The resulting color distribution can serve as a distinguishing feature: »Kambaba Stone« shows black circles on a green background. in »Nebula Stone« ther color distribution is the other way round: it shows green circles on a black background. However, from a mineralogical point of view both rocks are very similar, so that the general term »Eldarite« can be accepted for both rocks.

Based on the results of the analysis, it is reasonable to use the name »Eldarite« as an general trade name for the variants »Nebula Stone« (Mexico) and »Kambaba Stone« (Madagascar). The term "Cambamba Jasper" and "Crocodile Jasper" used by some American and Madagascan companies is misleading, since jasper could not be detected in any of the samples examined.