Although they are clearly distinguishable on close inspection, the minerals astrophyllite and anthophyllite are often confused. Both specimens occur in the form of shiny, iridescent fibrous aggregates. Together with other minerals, they often form interestingly patterned rocks. One of these is an anthophyllite schist from Sweden. 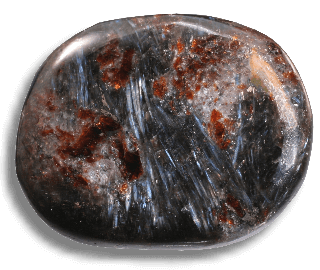 Anthophyllite belongs to the amphibole mineral group and is chemically related to the minerals actinolite and tremolite, known in a fine-fibrous, felted form as "nephrite jade". Similar to these, anthophyllite readily forms stemmed to radiating fibrous aggregates.

In the so called "Hermannover Spheres" found in the Czech Republic the mineral forms a radiating crust around a core of phlogopite mica. Very fine fibrous aggregates with a fiber diameter of less than 0.003 mm are called anthophyllite asbestos. The anthophyllite schists described here and offered as gemrock do not belong to the asbestos group, because the anthophyllite fibers are crystallized significantly thicker.

Anthophyllite occurs almost exclusively as intergrown crystels in rocks. In some of these rocks the mineral shows special light reflections. A well known example is the rock »Nuumite (Amphibolite-Schist)« from Greenland. A second example is the metamorphically formed anthophyllite schist from Sweden discribed in this article. The mineral is crystallized in shiny, sheaf-shaped aggregates that often show bluish to yellowish iridescence. Together with reddish brown garnet, granular epidote and colorless cordierite it forms a very attractive mineral association. Elemental analyses with the scanning electron microscope (SEM) could show that the iron content of the anthophyllite in this rock is significantly increased. Therefore the mineralogically correct term would be "ferro-anthophyllite". In contrast to the amphibole mineral Arfvedsonite, however, the mineral does not contain sodium. 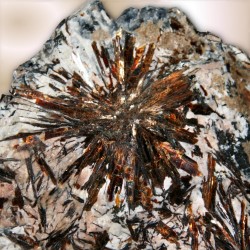 Astrophyllite occurs only very rarely as an independent mineral. The gemstones offered in the trade as "astrophyllite" consist usually of the rock syenite. It contains beside astrophyllite also large quantities of white nepheline and greenish black aegirine.

Syenites belong to the rock family of the plutonites. The main components are alkali feldspar, amphibole, biotite, plagioclase and pyroxene. Apatite, corundum, muscovite, nepheline, quartz and titanite may also occur as minor constituents.

Anthophyllite and astrophyllite may occur as shiny, iridescent fibrous aggregates. The different color of their iridescence is the best clue to distinguish the two minerals.