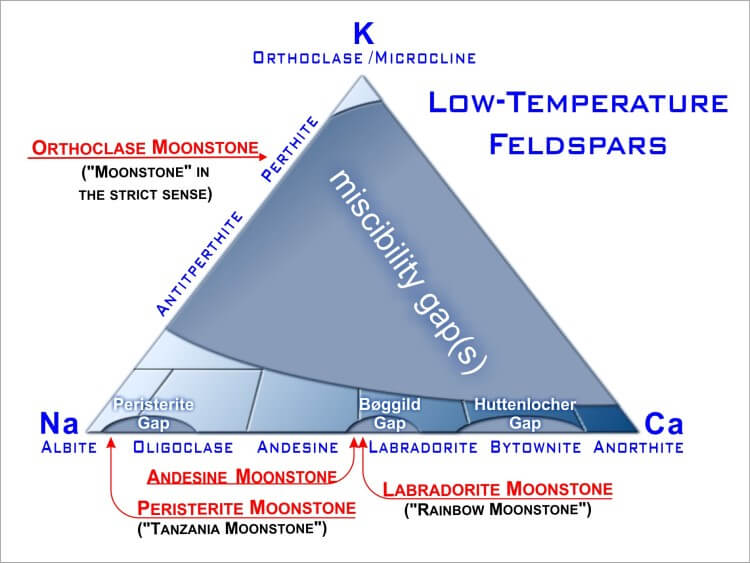 »Moonstones« are not restricted to one mineral only

"Feldspar" is a summarizing term for a groupe of aluminous silicates. Chemically, the individual members of this family differ mainly in their varying contents of sodium (Na), calcium (Ca) and potassium (K).

Orthoclase feldspar occurs in three different modifications, which differ in their crystal structures and formation temperatures.

The monoclinic sanidine feldspar forms at temperatures of more than 600°C. Transparent specimens, which typically have a faint smoky color, are sold as faceted collector's stones.

At lower temperatures the triclinic microcline feldspar crystallizes. The opaque to slightly translucent gem and decorative stone is available both as a fine-grained variety with a homogeneous color distribution and as a coarse-grained stone with many white cracks, which give it an attractive speckled appearance. A blue-green color variety containing lead is known under the trade name »Amazonite«. 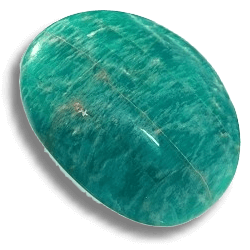 Three components have to come together to develop the green to light blue color of »Amazonite«: Lead, water and radiation. In combination with water the lead creates a disorder in the crystalline structure of a feldspar. These disorders generate color centers which are activated under the influence of electromagnetic radiation. In orthoclase the colors are more green, in microcline rather light blue.

The name amazonite is used in modern time as a mere color designation for all feldspars colored green by lead independent of their chemical composition. There is a tendency to add the word »Amazonite« to the name of all light blue to green plumbiferous members of the feldspar group. Therefore »Amazonite« has to be understood as a collective name for the varieties »Microcline Amazonite«, »Orthoclase Amazonite«, »Albite Amazonite« and the various »Plagioclase Amazonites«.

Also at low temperatures but under slightly different conditions, the monoclic orthoclase (= "the orthogonal breaking one") is formed.

Yellow, transparent varieties are called »Gold Orthoclase«. This stone can easily be confused with citrine. However, in contrast to orthoclase citrine has a shell-like, roundish fracture. Occasionally »Gold Orthoclase« is imitated by yellow glass.

A colorless and crystal clear variety of orthoclase is called adularia. This variety was eponymous for the typical light-effect shown by so called »Moonstones«, the adularescence.

Plagioclase is an other summarizing term for feldspars of the albite anorthite solid solution series.
The members of this group are classified according to their calcium content.

In its purest state albite is colorless. Specimens with a chemical composition in the range of the so called "peristerite miscibility gap" segregate oligoclase lamellas and are called »peristerite«. They can form a very attractive white »Moonstone« with strong blue adularescemce (trade name: »Tanzania Moonstone«) and a moonstone with yellowish and greenish bodycolor (trade names: »Amazonite Moonstone« or »Green Moonstone«).

Remarkable glittering, orange-brown oligoclase is known as »Sunstone« or aventurine feldspar (see under light effects below).

Larvikite is a little-known oligoclase containing rock. The segregation of corpuscles of orthoclase feldspar causes a blue iridescent shine. The material is mainly processed into decorative stones and flooring material.

»Galaxyite« is a dark anorthosite rock from Canada with small iridescent labradorite feldspars which are surrounded by a matrix of andesine feldspar and black inclusions (ilmenite, hornblende). The original name "galaxite" is misleading as the name is already used for a black spinel.

Labradorite is the "harlequin" among the feldspars. Some of them display colors ranging from golden yellow to green and violet due to the reflection of light on microscopically thin lamellas in the crystal. The generated light effect is the result of segregation processes in the so-called "Böggild miscibility gap". It is possible that twinning lamellas also contribute to this effect.

A special labradorite variety is the so-called »Oregon Sunstone«. With a calcium content of almost 70%, its chemical composition is exactly on the border between labradorite and bytownite. It is found in the colors red, yellow and green. Its intense glitter is brought about by metallic copper plates. With a yellow body color but without glittering inclusions this stone is available under the trade name »Golden Labradorite«. In the USA yellow labradorites are also called »Heliolites«.

The sodium feldspar albite can form solid solutions with both the orthoclase feldspar sanidine and the calcium feldspar anorthite at temperatures above 600°C. At these high temperatures all solution ratios are possible. This is why one speaks of a continuous solution series between albite and sanidine (summarizing name: "alkali feldspar"), as well as between albite and anorthite (summarizing name: "plagioclase").

With decreasing temperatures the ability to form continuous solutions decreases significantly. If the chemical composition of a crystal that formed at high temperatures falls into a chemically unstable sector called "miscibility gap", it begins to segregate at decreasing temperatures. From one single alkali feldspar the two feldspars microcline and albite can form at the same place. Such segregated orthoclase feldspars are called »perthite«. If the two feldspars arrange themselves in the form of irregularly shaped lamellas whose size is smaller than the wavelength of the light, then they can scatter the incident light back as diffuse light (Tyndall effect). This light effect, known as "adularescence", turns an ordinary feldspar into a »Moonstone«.

With a roundish cut such a stone shows a white or bluish light stripe that moves back and forth when the stone is moved. It occurs mainly in orthoclase feldspars with tiny segregated albite lamellas (»Perthite Moonstone«), but can also occur in albite. If albite segregates orthoclase feldspar, it is called »antipertite« (trade name: »Albite Moonstone«). If it segregates oligoclase, it is called »peristerite«. As the latter originates mainly from Tanzania, it bears the trade name »Tanzania Moonstone« (see Fig. 1). The color of the moonstone shimmer depends on the size of the inner structures. Wider lamellas create a white gleam of light, narrower ones the sought-after shades of blue. Moonstones with a blue light stripe are valued higher than those with a white one. Stones with a darker body color are valued higher than light colored ones. The adularescence light effect occurs mainly in alkali feldspar, but is also known in plagioclas.

If the light is not refracted at spindle- but lamella-shaped segregation bodies, a colorful play of colors is created, the iridescence.

It is often confused with adularescence. For example, white, transparent labradorite feldspar with a bluish and yellowish play of colors is often offered as  »Rainbow Moonstone«. But even the layman can spot the differences easily when taking a close look at the stone. The shimmer of a moonstone always consists of one color only. With round cut stones it appears as a silky lustrous stripe, never as a colorful shimmering surface. 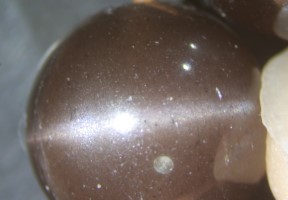 A colorless labradorite which appears dark brown to almost black due to needle like inclusions, is offered as "Black Moonstone" or "Moonstone Catseye". Even though round cut stones generate a bluish stripe of light, this is not caused by adularescence but by chatoyancy (cat's eye effect). This effect is caused by fibrous parallel mineral inclusions which reflect the light. Therefore, the name moonstone is not appropriate here. It is, in fact, »Labradorite Catseye«.

Strongly glittering, orange-brown oligoclase is known as »Sunstone« or »Aventurine Feldspar«. »Sunstones« are feldspars which show a distinct glittering due to flaky, highly reflective inclusions. To date, several members of the feldspar family have been identified that show such glittering inclusions. Amongst others andesine, labradorite and bytownite are the most important ones. The commercial available »Sunstones«, however, are oligoclases whose glittering appearance is caused by inclusions of finely distributed hematite particles. Iron, which formed the hematite inclusions, adds as well an orange-brown body color to the stone. The name extension "aventurine" refers to the typical glittering effect, the aventurescence. Therefore, a »Sunstone« must glitter, otherwise it is not a »Sunstone« !

»Oregon Sunstone« is a labradorite variety found in red, yellow and green colors. It has a powerful glitter effect (aventurescence) due to flaky inclusions of metallic copper. With a calcium content of almost 70% its chemical composition is exactly on the border between labradorite and bytownite.