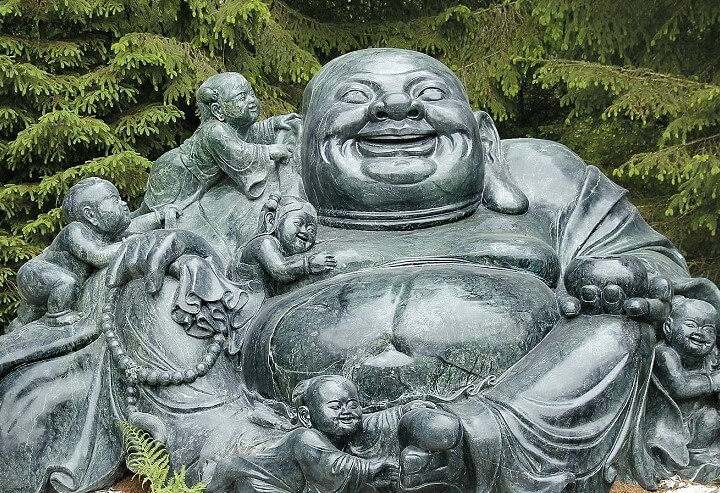 Statues made of nephrite jade can weigh several tons.

In China, the term "jade" has been used for at least 5000 years. Because of its very special nature of being tough and resistant like no other material known at that time, "jade" was used not only in Asia, but also in Europe and America for the production of tools and weapons. Over time, the material was also discovered for art objects (vases, sculptures).  A veritable "jade" cult began to develop, especially in China..

When scientists studied the chemical composition of "jade" traded in China in the 19th century, they discovered that at least two, completely different minerals were present. They found the mineral jadeite from the pyroxene group and finely matted grown minerals of the (ferro-) actinolite - tremolite mixed crystal series, which were called "nephrite", which belong to the amphibole group. 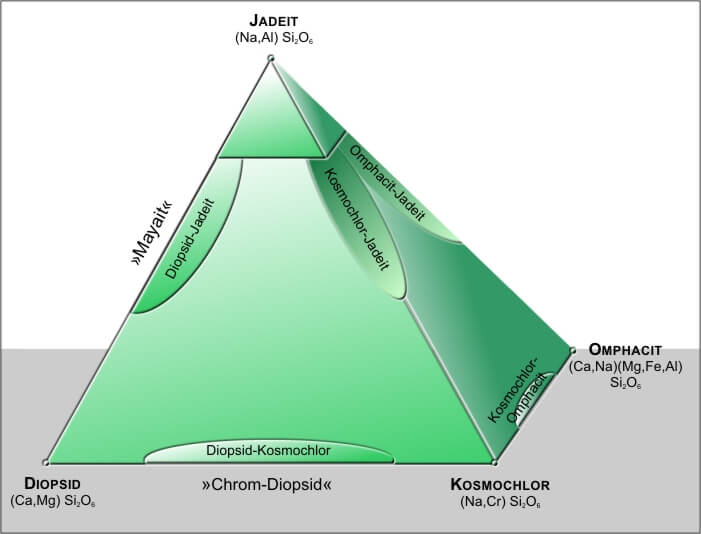 The pyroxene group includes numerous minerals that are partially or completely miscible with each other.

The mineral jadeite (chem. Formula: (Na,Al)Si2O6) is colorless/white in pure form. Impurities of foreign elements produce the sought-after green, violet or yellow colors. Green jadeite always contains chromium, very often iron and frequently magnesium and calcium in different proportions. These foreign elements can only be incorporated by replacing the sodium (Na) and/or aluminum (Al) in the jadeite lattice structure. This substitution occurs in a certain pattern. Chromium, for example, always replaces aluminum. If this substitution occurs completely, we have another mineral: Cosmochlore (chem. Formula: (Na,Cr)Si2O6 ). Jadeite and cosmochlore are completely miscible. They form a continuous solid solution series. Such solid solution series also exist between jadeite and diopside and between jadeite and omphacite. Therefore the demarcation of the mentioned minerals is not trivial.

Also omphacite and cosmochlor as well as cosmochlor and diopside form continuous solid solution series. Diopside-cosmochlor mixtures are commercially available as "Chrome-Diopside", diopside-jadeite as "Mayaite". Omphacite often forms in metamorphic eclogite rocks. Jadeite may also form in in the same process, through the metamorphic alteration of albite-feldspar. Both minerals can occur side by side at the same time. You see: The chemical-mineralogical study of the jadeite group leads very quickly to a complication of the subject, but helps little with the question: What is "jade"?

The problem is that for the old chinese traders it may not have mattered WHAT the jade rock is, but HOW it is. Western scientists tend to define the term "jade" by the identity of the minerals. This approach enormously complicates the demarcation to "non-jade" minerals within the respective group. 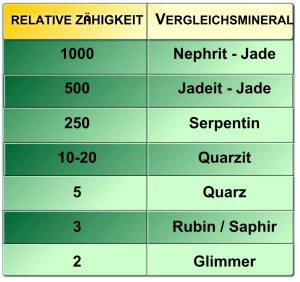 Toughness should not be confused with hardness. Many minerals are very hard, but so brittle that they immediately break under the impact of a hammer. Not so true »Jade«. It is extremely resistant to strikes and was therefore initially used as a material for tools and weapons. In their search for materials with appropriate properties, Stone Age peoples around the globe always encountered the same materials: jadeite and nephrite.

In the case of »Nephrite Jade«, too, a purely chemical-mineralogical approach does not lead to a clearly delimited definition. »Nephrite Jade« consists predominantly of the mineral actinolite, grown in form of tiny needles and fibers. These fibers are interwoven to form felt-like aggregates. Actinolite can also occur in the form of large, well-crystallized crystals. In that habit the mineral is not called »Nephrite Jade«, because it lacks an important property: the markedly extensive toughness that occurs only in its felt-like aggregate structure.

The situation is further complicated by the fact that actinolite and its iron-rich variant ferro-actionolite form a continuous solid solution series with the iron-free mineral tremolite. Both minerals differ only in their iron content. If the iron is missing or present in traces only, the mineral is referred to as tremolite, with medium iron contents as actinolite and with large iron contents as ferro-actinolite. The dispute about how much iron a »Nephrite Jade« may or must contain, to justify the name and its assignment to the jade group, has been going on among gemologists for generations. It flares up again as soon as a new gem material comes on the market that claims to be »Nephrite«" or »Jade«. One example are "Nephrite cat's eyes" in gray to gray-green colors that appeared in the year 2002 on the mineral market. They consist mainly of tremolite, with more or less large admixtures of actinolite. The cat's eye effect (chatoyance) is caused by light refraction at fine parallel tremolite/actinolite fibers. Here the fine fibrous structure is given, but not its matted formation, which would give the material the toughness of »Jade«. Therefore, we should speak here of tremolite or tremolite-actinolite cat's eyes, but not of "Nephrite cat's eyes".

These examples are intended to show that the term »Jade« cannot be fully described in chemical-mineralogical terms unless the physical properties are also included in the considerations.

Traditional mineralogy gets along well with the physical property of hardness. Hardness can be used to distinguish a ruby from a red spinel and both from a garnet. However, the toughness of a mineral aggregate or rock is not a criterion readily used by mineralogists and gemmologists. It is therefore often neglected to approach the question "What is jade?"