Minerals are inorganic chemical compounds that crystallize naturally. Many of these compounds can also be produced industrially. The sale of these industrial products is subject to the Chemicals Levy Ordinance, which stipulates, among other things, that toxic substances must be labeled and may only be sold with a safety data sheet.

In the mineral trade, a corresponding procedure has been unusual up to now, because minerals are usually in a different form than industrial chemicals. Depending on whether they occur as powdery coatings, well crystallized, or as inclusions in host minerals, they develop varying degrees of toxicity. Substances used in the chemical industry are usually powdered, which gives them a significantly larger surface area than their crystallized mineral kingdom counterparts. A larger surface area means a larger surface area for solvents to attack and thus a greater potential to be absorbed by the human body.

One gram of a well-crystallized mineral can potentially pass through the gastrointestinal tract without being dissolved and causing symptoms of poisoning, whereas one gram of mineral powder can potentially be toxic. On the other hand, natural minerals are rarely as pure as the industrial products. Incorporated impurities or decay products can both improve solubility and add up to the potential hazards of the individual chemical compounds present.

In order to estimate the potential hazard posed by a toxic or harmful mineral, the following factors must be considered:

Copper bearing Minerals that are harmful to health 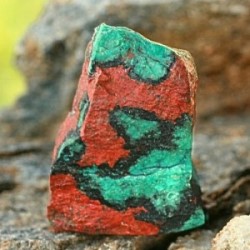 As with all substances in nature, the dose is crucial for the effect. Water consumed in excess is fatal. If you drink too little, you die of thirst. It is also comparable with the element copper. As a trace element, copper is a component of many enzymes and is therefore essential for life. The daily requirement of an adult human being is about 2 milligrams. Higher doses from 2-4 mg of copper per liter of water lead to symptoms of poisoning such as nausea, vomiting and diarrhea. Children are particularly at risk, as they are much more sensitive to copper overdoses than adults. Copper is mainly stored in the liver. Chronic poisoning causes damage to the liver and kidneys and can even lead to death in young children.

Some copper minerals are used as pesticides. The copper(I) oxide cuprite (Cu2O) is used for antifouling marine coatings because the dissolving copper kills algae and other aquatic organisms. The copper(II) oxychloride atacamite (Cu2Cl(OH)3), which often occurs in association with chrysocolla, is used in agriculture as a plant protection agent (fungicide). Both minerals are harmful to humans when swallowed and when dust is inhaled.

Copper minerals are very toxic to aquatic organisms. They can cause long-term adverse effects in water. Water-insoluble copper minerals in powder form are also considered to be highly hazardous to water and must not be allowed to enter groundwater or sewage systems, even in small quantities. 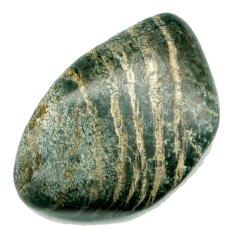 The green gemrock »Silver Eye« consists of the minerals chrysotile and antigorite, both belonging to the serpentine group. In alternating layers they form a serpentinite rock, in which chrysotile forms silvery shining fibers, so-called chrysotile asbestos.  In the »Silver Eye« serpentinite, the fibers are arranged to produce a cat's eye effect (chatoyance).

Are gemrocks containing asbestos a danger for the customer?

The dangers of asbestos-containing materials have become increasingly clear in recent decades. The hazard potential of »Silver Eye« serpentine is the same as for eternit sheets, brake linings and heating stoves: Released asbestos needles can enter the respiratory tract and trigger lung cancer / asbestiosis. So much for the scientific findings. 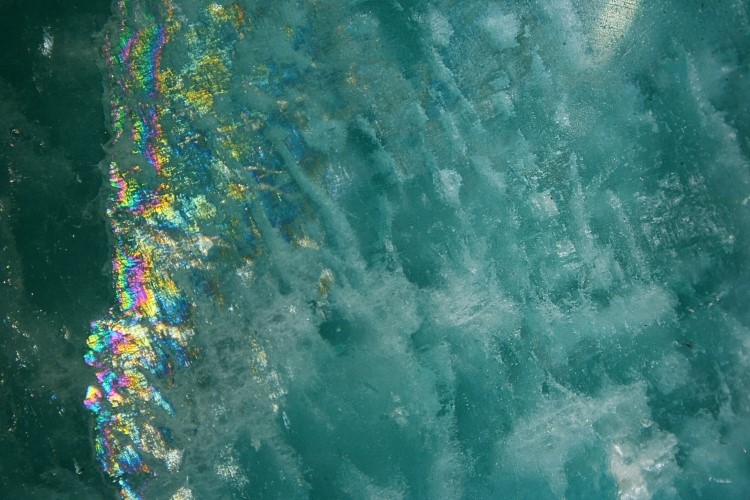 The color of Amazonite is based on 3 components: lead, water and radiation..

Minerals are chemical substances formed by natural processes. In contrast to the artificially created, solid chemical compounds (chemicals), which are mostly produced in form of powders , the minerals that are interesting for mineral collectors and jewelry lovers are crystallized in a clearly visible macro size. Minerals may - just like industrial products - carry heavy metals and other elements which under certain circumstances can have a harmful effect on human health or the environment.

As long as a mineral - with the exception of radioactive minerals - is only placed on the windowsill and looked at, its ingredients can usually be ignored. The important thing is not what is inside a mineral, but what is released into the environment and absorbed by the human body. 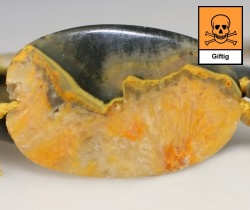 Arsenic sulfides are not suitable for jewelry

We got to know this yellow-grey marbled rock under the trade name "Eclipse". Apparently, the inventor of this name was reminded of a solar eclipse when looking at the stone. It turned out that the material originates from a fumarole field near the town of Garut on the Indonesian island of Java (SERRAS-HERMAN 2013).

The trade name "Eclipse" did not establish itself. In english-speaking areas the stone is offered as "Bumble Bee Jasper" or "Mustard Jasper".

Analyses carried out by the EPI laboratory showed that this stone is by no means a jasper. Rather, it consists essentially of calcite. Tiny pyrite crystals (FeS) are embedded in the grey areas of the calcite, contributing to its dark color. In investigations of the University of Freiberg in Germany, the arsenic mineral realgar (As4S4), a compound of the elements arsenic and sulfur (arsenic sulfide), could be detected in the golden yellow to orange colored areas. The chemically closely related arsenic mineral Auripigment (As4S6) could not be detected. This does not necessarily mean that it is never present, it merely could not be detected in the samples provided. In earlier publications (NIEDERMAYR, G. , 2010) it was assumed that the yellow color is brought about by orpiment. This would be more consistent, since orpiment has a yellow-orange color, whereas realgar is more of a red-orange color. It is possible that the yellow color is caused by the other arsenic sulfides, whose presence was indicated but could not be specified explicitly (GÖTZE et al. 2014). Based on these findings, the preliminary mineralogical name for this rock is: REALGAR CALCITE.

Like all arsenic sulfides, realgar is toxic under certain conditions.